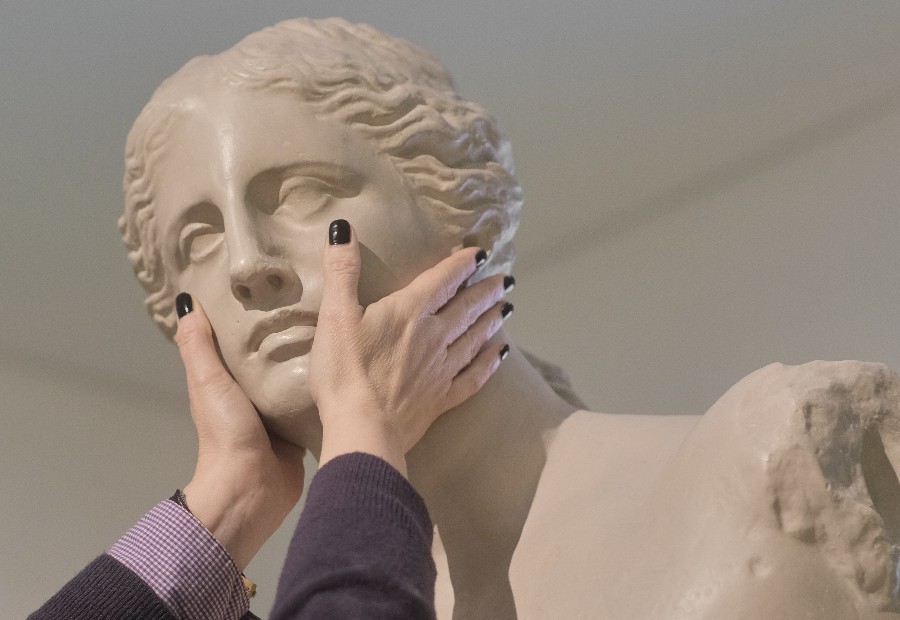 The Uniqueness of the Museum

The Uniqueness of the Museum

The Tactual Museum, unique in Greece and one of the 5 Museums of its kind in the world, offers equal opportunities to blind or partially sighted visitors from Greece or abroad to perceive the magnitude and richness of our cultural heritage, through the sense of Touch. At the same time, it is a cultural and educational destination for sighted people, adults and children, since through its special interactive programs visitors can explore the Ancient Greek civilization, as well as get informed and activated for the welfare of the visually impaired people.

The Tactual Museum was created in 1984 thanks to the high vision and relevant initiative of the President of that time, Protoppapadaki Lavredia and the Manager Kefakis Emmanuel for the establishment of conditions of equal access of the visually impaired people to the ancient greek culture.

It is located in Kallithea, in the historic two-floor building of the Lighthouse for the Blind in Greece, donated by George and Eugenia Empirikos in the 50’s.

Over the years its exhibits-exact copies of the original ones, exhibited in other museums in Greece and abroad- have been enriched, while at the same time significant thematic-informational programs have been implemented; As a result the Τactual Museum has evolved into a modern cultural destination, completely accessible to the target population.

Towards this direction, there have been valuable helpers and supporters in this effort, such as physical persons, various organizations, and state structures-Ministries, maximizing the Museum’ s presence and offer as a unique cultural, social, educational and touristic destination in the country.

A Museum for All

A Museum for All

In 2004, the Tactual Museum opened its doors to the wider public, offering the visitors a new way of approaching the ancient Greek culture and at the same time informing and raising awareness about issues related to the field of disability, especially blindness.

Εver since, thousands of visitors from all over Greece and abroad, of all ages, with and without visual impairments, have been visiting the Museum per year, experiencing this way what it has to offer.

The unique opportunity of tactile contact with the exhibits, which is not offered anywhere else, allows the visitor to capture the depth and essence of art and culture and thus come into substantial interaction with history;

In short, the importance of the existence of such a Museum as a portal of culture and history, but also of social cohesion and inclusion, proves undoubtable.

In 1988 the Tactual Museum received the “European Museum of the Year” Award, among 70 European museums.

In 1999, the Museum building suffered serious damage due to the earthquake, resulting in the suspension of its operation. Thanks to the valuable support of the Ministry of Health and Social Solidarity and the American Friends of the Blind in Greece, its restoration began and was completed in January 2004

The reopening of the Museum was a great cultural event, while the opening of the renovated building, on 9/3/2004, was celebrated with the presence of the President of the Hellenic Republic of that time, Kostis Stefanopoulos.

2004 was also the year that the Tactual Museum received distinction for offering accessibility from the Society of Friends of Museums.

In 2016, thanks to valuable fundings from the Hellenic Parliament, the Ministry of Culture and Sports and the American Friends for the Blind in Greece, serious building damage was repaired at the Tactual Museum and the re-opening was ensured after a long-term suspension of work.